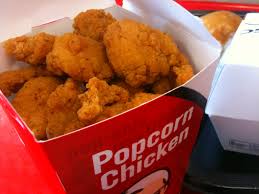 Self-driving 5G KFC ‘chicken trucks’ have been spotted in Shanghai, causing a stir on social media.

In late November, Twitter users started noticing KFC trucks driving around the Shanghai city centre. The driverless, 5G-enabled food trucks are a project developed between Yum Foods, the parent company of KFC, and Neolix, one of China’s leading tech start-ups, according to digital magazine, Road Show.

From start to finish there is no human interaction. Customers place their orders on a screen mounted on the truck’s side. Using QR codes, hungry customers pay for the transaction while a sliding door opens to reveal their selected meal.

Shanghai-based Neolix raised $29 million to create a fleet of small, level four autonomous vehicles. According to a Forbes report, the fleet will be used in the same manner for Pizza Hut – another Yum Foods brand.

The trucks have seen use on the Covid frontlines as well. The Neolix-developed truck has been used as a mobile medication dispensary in Thailand.

The unique electric vehicle (EV) has a top speed of 50km/h and a range of 100km. Its level four autonomy makes the socially-distanced food vendor fully autonomous but equipped with a traditional cockpit where driver control can still be accessed.

While not much more of the basic specifications of the EV are known, the Australian website, Whichcar.au, speculates that the chicken trucks would be geofenced within a section of the city, with routes and stops pre-programmed in the EV’s system. Social media users have spotted the driverless food trucks outside university campuses, on busy streets and in city centres.

The Covid-19 virus has created a massive surge in growth for tech companies like Neolix. According to a Bloomberg article, 200 of Neolix’s small, unmanned EVs have been ordered by the likes of e-commerce giants such as JD.com and Alibaba.

KFC has temporarily dropped its iconic slogan, ‘finger-lickin’ good’ because it is at odds with the current hygiene protocol in the age of Covid-19.

Adverts containing the slogan drew the ire of consumers who made as many as 163 complaints to the US Advertising Standards Authority. KFC has taken down ads featuring the line and has said it will return, ‘when the time is right’.