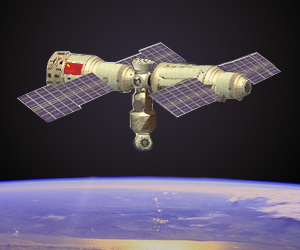 Tianhe or ‘Heavenly Harmony’, China’s core module of its space station was successfully launched into orbit on the 28th of April from Hainan Island, strapped to a Long March 5B rocket.

China’s space station – Tiangong or ‘Heavenly Palace’ – is expected to be complete and operational by 2022 and will join the International Space Station (ISS), as the only operational space stations in orbit. The core module is the largest of several pieces of the space station which will be assembled piece-by-piece.

Tiangong will orbit the planet for anywhere between a decade to 15 years, at an average height of around 400 kilometres above the surface of the Earth.

Measuring 16.6 metres tall, with a diameter of 4.2 metres, the first piece of the space station has an internal living volume of 50 cubic metres and can house up to three astronauts at a time, according to the China Aerospace and Technology (CASC).

Tiangong will be notably smaller than the ISS, which is roughly five times larger, according to CNN. The vessel, while compact in size, was designed to facilitate longer stays by astronauts.

Gu Yidong, the chief scientist at China’s Manned Space Program, said that China’s space station was not designed to compete with the ISS in “terms of scale”, rather it was developed specifically for China’s scientific needs.

Tiangong will host several international astronauts and scientists over the next few years. Six research grants have been accepted by CASC to date, according to CNN.

The University of Oslo will conduct research dedicated to the effects of low gravity on tumour growth. The month-long experiment is at the cutting edge of cancer research and, according to head researcher, Tricia Larose, the mission will use 3D stem-cell organoids as colon stand-ins to see how cancerous mutations are affected in zero gravity.

Larose said all previous experiments conducted in space have used “two-dimensional cell lines” and that her 3D samples are the most “physiologically relevant” to date.

Tiangong’s first visitor will be a massive, Hubble-sized telescope. China plans on launching the giant instrument into space in the next few years where it will orbit several hundred kilometres away from Tiangong – a stone throw in cosmic metrics!

The China Sky Survey Telescope or ‘Xuntian’ will have 300 times Hubble’s field of view and will study the large-scale structure of matter, as well as dark matter and dark energy.

Xuntian has been designed to dock with the China Space Station, to allow the astronauts to service it.