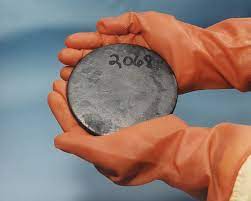 China innovation41 China sustainability46 China tech91 Chinese technology126
A team of Chinese researchers has developed an ultra-absorbent material capable of extracting uranium from seawater. Inspired by the blood vessels inside our anatomy,...

A team of Chinese researchers has developed an ultra-absorbent material capable of extracting uranium from seawater. Inspired by the blood vessels inside our anatomy, the group’s new method is reportedly 20 times more efficient than previous techniques.

Uranium extraction processes on land involve traditional practices like in-situ leaching and underground or open-pit mining. However, according to the Nuclear Energy Agency, at least four billion tons of the radioactive element lies beneath our oceans – 500 times more abundant than land-bound uranium estimates.

Japanese scientists have explored uranium extraction methods from seawater for more than five decades already. In the 1960s, the Japan Tobacco and Salt Corporation began large-scale efforts to obtain the nuclear fuel from seawater. By the 1970s and 80s, several government-funded projects had been greenlit all around the world.

However, a combination of a poor uranium market and less than optimal results halted any momentum the relatively new field had gained.

Enter Linsan Yang and his team at the Chinese Academy of Sciences. They created a synthetic polymer membrane inspired by the workings of the human blood vessel.

Yang infused the polymer with a compound called amidoxime that increases the membrane’s ability to bind to uranium ions, greatly enhancing the potential uranium yields.

In their study, published in Nature, the team explains how the blood vessel’s “fractal structure” and micropores within the vessel, were ideal for mass fluid transfer.

Previously, scientists had experimented with acrylic fibres as a means for extraction but found yields too low. The “biomimetic” membrane created by Yang and his colleagues was able to extract uranium from a water solution spiked with uranium at 32ppm (parts per million), 20-fold more than previous methods.

To ensure the Chinese-based team was truly catching uranium, an x-ray photoelectron spectrometer was used to identify the presence of the dangerous element.

Yang also discovered that the uranium materials gleaned from the seawater extraction process could be cleaned and purified with hydrochloric acid, removing much of the impurities and removing 98% of the uranium from unwanted by-products.

Reid Peterson, an associate at Pacific Northwest National Laboratory, said that the primary challenge posed to the uranium-from-seawater harvesting industry is that mining and other land-based uranium capture methods are more economical.

Peterson explained that Yang’s breakthrough went a long way to improving those economics. The scientist also said that uranium would replenish itself slowly in the oceans but that underwater reservoirs of the element are so abundant there are few concerns.