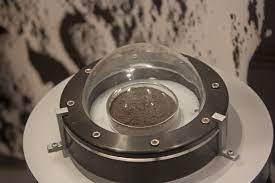 The Chang’e 5 lunar lander, China’s latest moon-going vehicle, has become the first craft of its kind to locate water in real-time. The historic first has set the scientific community’s tongues wagging as researchers race to discover more about the anomaly.

The presence of water was discovered at the Chang’e 5’s landing site near the Oceanus Procellarum or The Ocean of Storms region on the moon’s near side, according to the Chinese National Space Administration (CNSA).

Employing an arsenal of specialised tools, including a spectrometer, several cameras and a scoop-arm, the lander collected a 2.2kg soil sample, taken roughly 1.8 metres below the lunar surface.

To work around this, CNSA engineers used a “thermal correction model” and discovered that water occurred in the soil sample at a minute 120 parts per million (ppm) in regolith (the layer of unconsolidated solid material covering the bedrock) and 180ppm in light rock.

According to the CNSA, the water found near and on the moon’s surface could be attributed to solar winds constantly bombarding the moon with charged particles. However, the deeper-lying samples still perplex researchers.

While analysing the moon rock interior, scientists discovered that the higher water content (upwards of 60ppm) could be attributed to the soil being excavated during the Chang’e 5’s landing process and degassing occurring beneath the lander. Degassing is the process of gases or other volatile substances seeping from areas where they had been previously trapped.

The researchers believe that the water discovery is consistent with volcanic activity in the Oceanus Procellarum region. The Ocean of Storms is also known to have high concentrations of other rare earth elements phosphorus and potassium.

According to Space.com, CNSA has been attempting to pinpoint the age of the moon’s volcanic activity but has yet to release further details on the topic.

Sample return missions are incredibly few and far between in the half-decade man has been on the moon. In fact, China’s Chang’e 5 rover is only the third craft on the moon since the Soviets landed the Luna module in 1976.

The moon better get used to hosting more guests, as both China and the US are planning multiple trips in the near future. NASA has outlined an ice-hunting mission called Volatiles Investigating Polar Exploration Rover (VIPER) which is set to begin its mission on the moon’s south pole next year.

Chinese space authorities have also announced a Chang’e 6 mission for 2024, to focus on exploring and retrieving samples of scientific interest from the moon’s dark side.